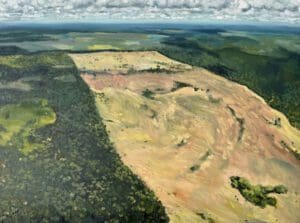 I have had a dry couple of weeks in terms of finding source images and have realised there is a lot of repetition with reports using images from years ago rather than ones taken directly of the issue discussed.

Then I stumble upon five images that spark my interest within a couple of days, so yesterday I started them all which was immensely satisfying. I say stumble, it actually takes a deep delve into publications from all over the world to find relevant content and I am getting better at it.

A fellow artist made a comment when I started this project of producing approximately one painting a week that I hadn’t allowed for illness or holidays but I understand the way I work; it ebbs and flows, inspiration comes in great waves of productivity which then slow almost to a stop and surges again. I have learned to relax during the dips and remain confident it will return.

Apart from starting five paintings yesterday I also finished a painting based on a photo taken by Greenpeace of the deforestation of the Amazon. I have wanted to document this as I’ve been reading reports that the increase in this practice had surged over the last two years, yet recent photos were scarce. Greenpeace had taken a flight over the area in March and so I was able to refer to the saddening new images for my work.